This is Jen, a junior at Olin College, and a summer engineering intern at Lever.

Jen initially chose to intern at Lever because they’re reinventing company culture with hiring software. But what she didn’t realize was that Lever itself is internally fostering a culture of giving back.

Exposing employees to new ideas and innovative startups is a big part of Lever’s culture. So when Jen heard that Grace, Watsi's co-founder, would be speaking to the Lever team, she took advantage of the opportunity to learn more about how Watsi (a Lever customer) is using technology to bring healthcare to the world.

"You don’t have to be working full-time for a nonprofit to be making a difference," Lever told its employees before the talk. "You’re building the product that supports organizations like Watsi.” 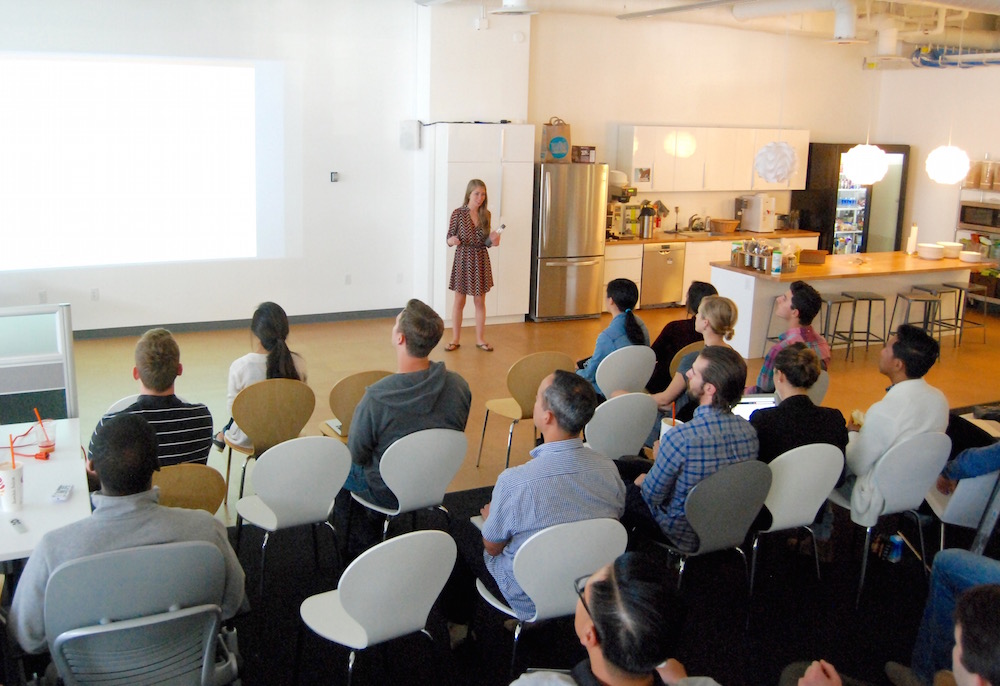 Grace told Watsi’s story. After the talk, Lever sponsored Watsi gift cards for each of their team members, enabling them to help fund healthcare for a patient themselves. 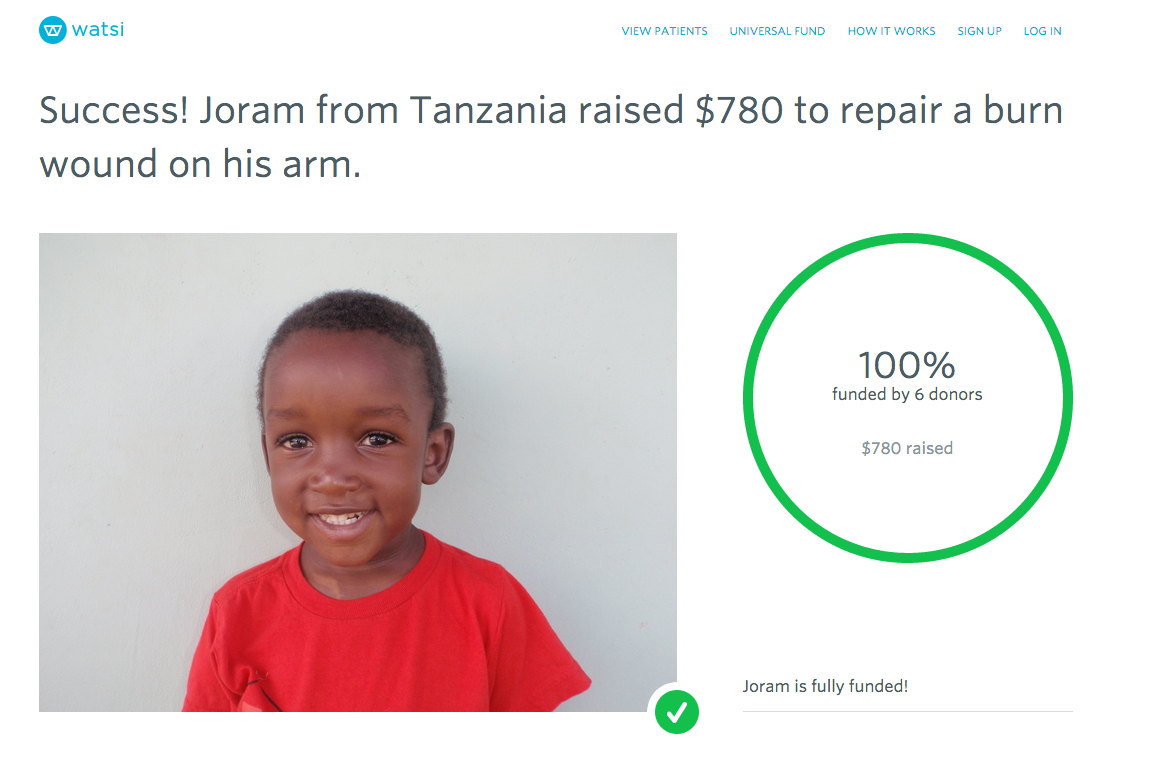 Jen used her gift card to fund healthcare for Joram, a three-year-old boy from Tanzania who suffered severe burns on his arm, chest, and stomach after a large pot of hot milk spilled on him. His family could not afford the $780 skin graft procedure to treat the burns, and restore motion in his arm.

“Having a face and story to go along with the name helped me have a better understanding of Joram, his condition, and the impact my donation would have,” Jen told us.

A few weeks after Jen contributed to Joram’s procedure, he received successful surgery. Joram is no longer in pain, and he has fully restored motion in his arm.

“Receiving his treatment update was an unusual experience, because this was one of the few times (if not the only time!) where I got to know what my donation was specifically used for, and to hear about its effect,” Jen shared. 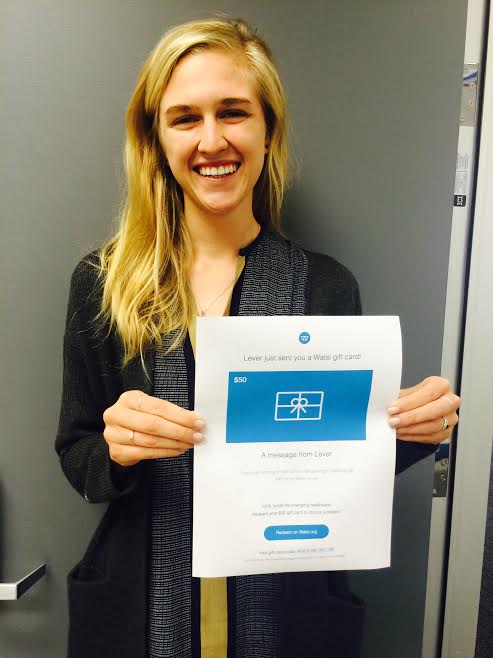 Kelsey, a business development manager at Lever, also received a Watsi gift card. She used hers to fund healthcare for Mary, a 29-year-old aspiring beautician from Kenya who had a life-threatening brain tumor. 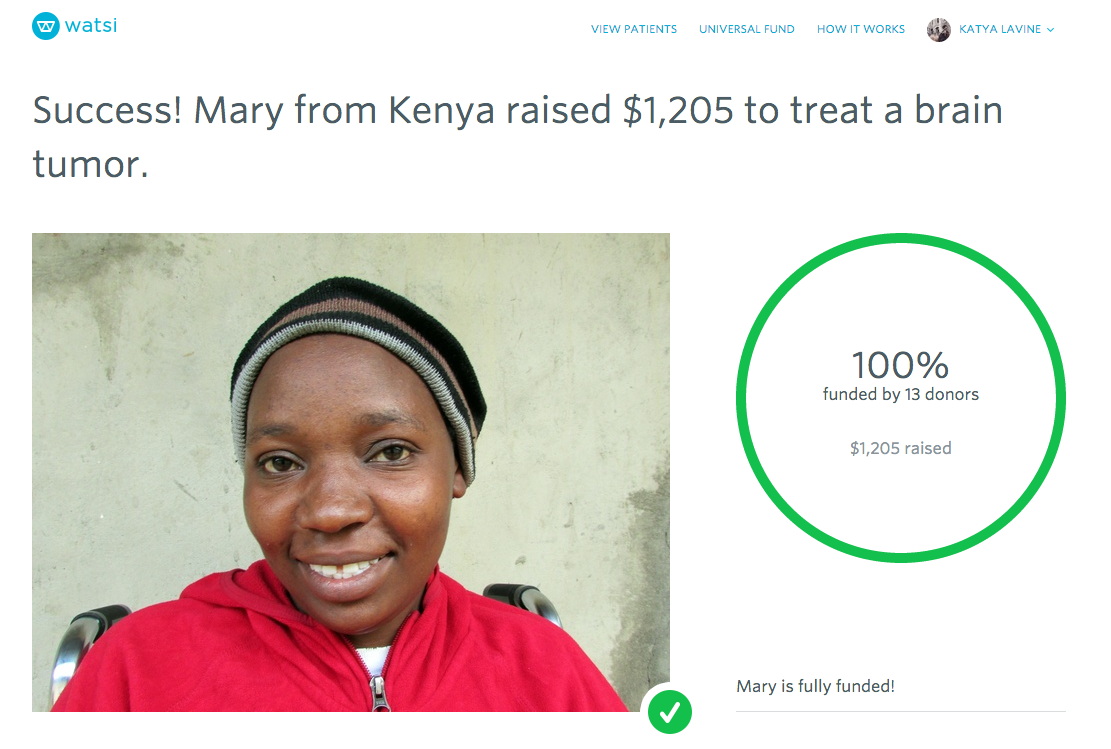 “I chose to donate to Mary, who needed an operation on a brain tumor. Both of my parents have died of cancer, my father of an inoperable brain tumor,” she told us. “So I have a strong connection to those fighting brain tumors and it resonated closely with my experience. I wanted to put my gift card towards preventing a brain tumor from claiming another life.”

Mary, the patient Kelsey supported, after her successful craniotomy.

“It brought me tears of joy to read a quote from Mary's family about how she is healing well and planning to return to her life,” Kelsey said.

Since Grace’s presentation, 15 Watsi patients like Joram and Mary have received healthcare thanks to support from Lever and its employees.

Sponsoring Watsi gift cards for its employees was a unique way for Lever to give back, and let its team personally engage with the values that their company supports.

Lever tells us that the best part of the experience was being able to tell their team, "by donating as individuals and together as a team, you’re making a huge difference in people’s lives.”

Thank you, Lever, for spreading the health on Watsi!

Want to learn how your company can follow in Lever's footsteps and support patients around the world? Visit our website for more information on how to get involved.